Articles in the SQL category

PostgreSQL continuous backups are very powerful, if you know how to use them for recovery. There’s nothing else to do to be sure about that other than actually trying it. Personally, I see recovery as a single process with two possibly different outcomes:

Both scenarios follow the same steps and differ slighty at the end.

In this case, you’re trying to recover as far as possible. With previous steps done succesfully, the next follow:

If you’re about to migrate your data, you might be better off with simple pg_dump, pg_dumpall and pg_restore commands rather than using full backup/WAL segments combination.

PostgreSQL’s PITR can help you restore your accidentally deleted/corrupted data. After the first three steps mentioned above, you should follow with these:

You don’t want to find yourself in the middle of the biggest database failure of the century just to find out your backups don’t work, and even if they did, you would have no idea how to use them. Or, even worse, there are no backups at all, because your backup strategy has been failing silently without a single notice for several months.

Try to recover from your backups once in a while.

I forget things and make mistakes. We all do. That’s why I built an ensemble that takes care of our database automatically. Nothing fancy, just a bunch of good old Bash scripts managed with systemd rathern than cron. Next time, I’d like to show you the code and walk you through our current setup.

Just a very few of my day-to-day work tasks can be accomplished without PostgreSQL. For years I’ve been a (power) user of this wonderful relational database, knowing almost nothing about how its internals really work. Faced with the need to build a backup and recovery strategy, I’ve recently read up a lot on this topic.

As I don’t find it very odd for a GIS person to be given such an extraordinary task (nobody wants to lose the priceless spatial data, right?), I hope this series might shed light on how to prepare and manage the backup/recovery process to those, who are up to such a task. I won’t be discussing backup strategies based on pg_backup tool, as those don’t offer neither continuous archivation, nor point-in-time-recovery (PITR) - those two features disqualifies it as CleverMaps production backup strategy.

That leaves us with taking periodic base backups combined with continuous WAL archivation, as described below.

Archived WAL segments are worthless without a base backup they can be run on. It’s crucial to have consistent, periodic base backups to keep your data safe.

pg_basebackup takes base backup of PostgreSQL cluster. Nothing fancy. Gzipping the output folder once the backup is done is definitely a good idea.

In our current environment, we take a base backup of each of our clusters once a week.

To properly set WAL archiving, several postgresql.conf settings has to be adjusted:

Setting wal_level to replica writes enough information for WAL archiving. Turning on archive_mode will run archive_command each time a WAL segment is completed. archive_command might be anything from simple cp to rsync or aws s3 cp commands. It is absolutely critical that the command returns non-zero exit code in case of failure (including when a file with the same name already exists in your backup folder).

That’s it, after reloading PostgreSQL service, new WAL files should be copied to /backup/wal directory. The PostgreSQL process user (postgres usually) has to be able to write to the location.

It might be a real PITA (fiddling around WAL segments included) to start a crashed database cluster with no space left. Keeping a dummy file in your pg_xlog location might save you a lot of trouble. Create one with following command. If you run out of space, remove this file and you get 300 MB for free. Don’t forget to recreate it after you start the cluster.

There’s no need to keep archived WAL segments forever. They’re only needed until you take another base backup. Again, deleting WAL segments manually (or using find ! -newer previous_base_backup.tar.gz) might lead to accidental corruption of your backups. It’s much safer to use pg_archivecleanup pointed to your WAL backup folder, referencing the last sucessful full backup. Below is the script we use to keep our WAL backup folder of reasonable size, keeping the last three full backups.

Functional backups are crucial part of a solid backup/recovery system. They’re still just one half of that system, though. If not tested thoroughly, they’re even less than that. More on testing backups and recovering from failures next time.

Since version 2.4.0, PostGIS can serve MVT data directly. MVT returning queries put heavy workload on the database though. On top of that, each of the query has to be run again every time a client demands the data. This leaves us with plenty of room to optimize the process.

During the last week, while working on the Czech legislative election data visualization, I’ve struggled with the server becoming unresponsive far too often due to the issues mentioned above.

According to the schema, the first client to come to the server:

Other clients get tiles directly from the filesystem, leaving the database at ease.

Nginx is fairly simple to set up, once you know what you’re doing. The /volby-2017/municipality/ location serves static MVT from the given alias directory. If not found, the request is passed to @postgis location, that asks the Flask backend for the response.

If you’re going to serve static tiles that don’t change often, it might be a good idea to use PostGIS to create files in advance and serve them with Nginx.

Using mercantile, you can create the tiles table holding the bounding boxes of the tiles you need. PostGIS them inserts the actual MVT into the mvt table.

Once filled, the table rows can be written to the filesystem with the simple piece of Python code.

PostGIS is a brilliant tool for generating Mapbox vector tiles. Combined with Python powered static file generator and Nginx, it seems to become the only tool needed to get you going.

Yesterday I spent two very unpleasant hours debugging the weirdest SQL error I’ve seen in my life, running the below query (simplified for this post).

Running this in your terminal will result in a nasty syntax error.

You stare on the screen for a while, absolutely sure that number 1111 is nowhere close to the data you work with. You try again. Another error. You save the code into a file and try again. It works. What the heck? You try again using the bash heredoc. Another failure.

The minute you realize $$ is being substituted with the ID of the current process, you feel like the dumbest person on Earth. Yet the happiest one at the same time.

The solution is trivial.

I spend a lot of time reading PostgreSQL docs. It occurred to me just a few weeks ago that those versioned manuals are great opportunity to get an insight into PostgreSQL development history. Using PostgreSQL, of course.

TOP 5 functions with the most verbose docs in each version

Number of functions available in each version 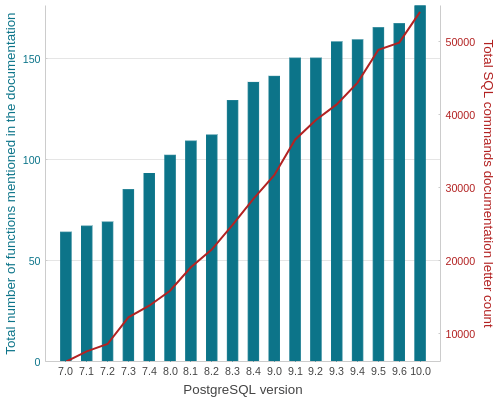 The most verbose docs in each version

Something’s going on in an upcoming 10.0 version. 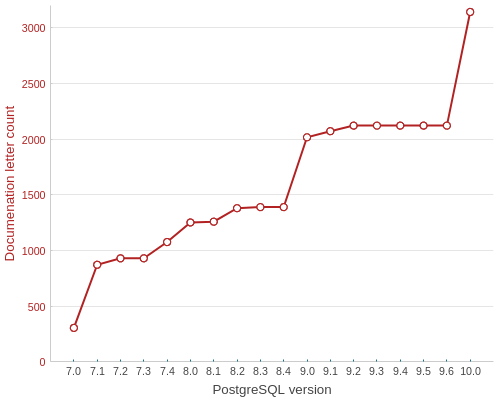 All the data was obtained with the following Python script and processed inside the PostgreSQL database. Plots done with Bokeh, though I probably wouldn’t use it again, the docs site is absurdly sluggish and the info is just all over the place.